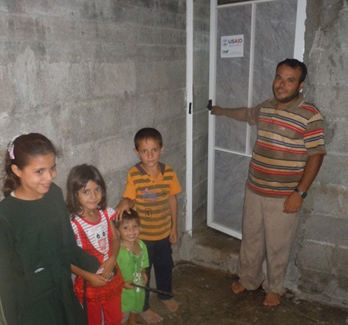 10 years ago, Khaled Zamel a 35 year old father of eight, managed to build a house for his family. He borrowed money from friends and sold his wife’s gold jewelry to pay for building block walls and a concrete ceiling. Khaled was working as tailor in Israel, and was planning to reimburse his friends out of his salary. Unfortunately, two years after building the house, Khaled lost his job with the start of the second Intifada, when Gazans like Khaled were no longer allowed to go to work in Israel.

“I owed a lot of money to my friends, and I still haven’t been able to pay them back. After I lost my job as a tailor my health deteriorated; I am suffering from vision problems and kidney stones, and so I cannot find another job” Khaled said.

Khaled’s home remained incomplete for 8 years; the ceiling is fragile and cracked as result of Israeli bombing during the Gaza War (called Operation Cast Lead by the Israelis). The home lacks sanitary lines, sewage is discharged in to a pit, and there are only two water pipes in the house (one in the kitchen and the other in the bathroom). There is not electrical wiring, except for some bare wires and few lamps.

Mokaram, Khaled’s wife, was excited to apply for help with the rehabilitation of their home through the the Palestinian Community Assistance Program (PCAP), implemented by CHF and funded by USAID through Mercy Corps. After socio-economic and technical assessments, the Zamel family was selected to benefit from windows and doors installation, and will benefit from substantial rehabilitation in the next stage of the program. “Our hope for a better standard of living began when CHF staff conducted assessments of our home. We were overjoyed when the contractors started installing the windows and doors.” said Mokaram.

“Our life has changed so much changed already [after the windows and doors were finished]; now I can control hygiene and noise, and we sleep safely at night. Before, rats and cats were entering the house while we are sleeping; the house was very damp in winter, which often made my children sick.” Mokaram added.

Khaled’s whole family expressed their gratitude to CHF and USAID for their new windows and doors. Said Maryam, Khaled’s 15 year old daughter, “I wish to have a quiet atmosphere to study. I can’t study well when there is noise; now I will be able to close the door and the windows and study hard.”