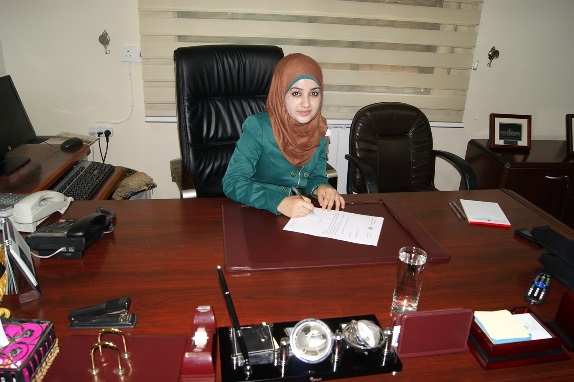 Basha’er Othman, Youth Local Council President from Illar, served as Minister of Local Government for one day on 22 August following her recent appointment by Minister Sa’ed Al-Koni. On her day as Minister, Basha-er said her top orders of business were to continue the work she has done in her capacity as YLC President by: bolstering support for youth in good government and democratic processes, addressing rampant youth unemployment especially among recent graduates, encouraging increased investment in Area C, and learning more about the structure of government and its regulations. Minister Sa’ed said he was delighted to have Basha’er’s one day of service and that her appointment was a sign of progress. “This just goes to show that a young Palestinian woman can play a role as an important partner in Palestine.” Bash’er has been an active member of the YLC, an initiative implemented by Global Communities as part of the USAID-funded Local Government and Infrastructure (LGI). Previously Basha’er served as acting mayor of Illar for two months when she worked directly with municipal council members and staff.